Most of the trails my family hiked with little ones were free from bears. They were raised in the desert and the biggest threats were rattlesnacks and the random mountain lion. Now that they are in the Pacific Northwest, we have a lot to teach them about our wildlife.

We hiked Paradise Valley Conservation Area which had a notable warning at the trailhead to keep an eye out for bears. My littlest child did NOT want to continue the hike, but I assured him there are ways to stay safe.

As you learn about bear safety, I suggest you turn this in to a family night activity and practice with your children! Have them do this over and over again until they don’t need to think about what they’re doing–they just know!

Here are some tips to remember!

IF A BEAR CHARGES YOU: 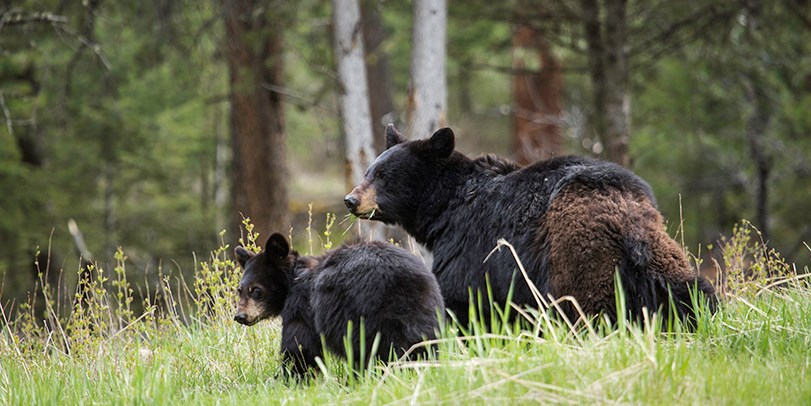 Different types of bears can mean different strategies. Here is some great information from the NPS. Note the difference between playing dead with brown/grizzly bears and black bears!

Bear attacks are rare; most bears are only interested in protecting food, cubs, or their space. However, being mentally prepared can help you have the most effective reaction. Every situation is different, but below are guidelines on how brown bear attacks can differ from black bear attacks. Help protect others by reporting all bear incidents to a park ranger immediately. Above all, keep your distance from bears!

If any bear attacks you in your tent, or stalks you and then attacks, do NOT play dead—ﬁght back! This kind of attack is very rare, but can be serious because it often means the bear is looking for food and sees you as prey.

If you’re in Washington State, you will most likely come across a black bear.  Grizzlies (brown bears) are very rare. Did you know black bears aren’t always black?  They can have a cinnamon or brownish coat. Their diet mostly consists of plants, bugs, berries and fruit with only a little meat from fish, small rodents or a random fawn.

Bear pepper spray can be a great resource to have with you as you hike and camp in the wilderness.  It is used in defense to stop aggressive behavior such as charging or attacking. Make sure you select an EPA approved product that is specifically designed to stop aggressive bears. It is not a repellent so do not apply to your body or equipment. Check with your national park to see if bear pepper spray is recommended or allowed for the activities you have planned. Learn more about selecting and using bear pepper spray in this introductory video or by visiting the Using Spray to Deter an Aggressive Bear page on Yellowstone’s website.

Here is a great option on Amazon that is allowed by the EPA and Health Cananda. It has a 3 year shelf life and a 30-foot spray range.

The National Park Service website has some GREAT resources about bears and what to do if you’re going to be staying in bear country.

This site uses Akismet to reduce spam. Learn how your comment data is processed.

No images found!
Try some other hashtag or username